How the League Evolved

The RSL evolved as a direct result of the camaraderie, concern and mateship shown by the "Diggers" for the welfare of their mates during and after the 1914 - 1918 War. That ethos of compassion and service remains today the motivating influence of the League.

Some key historical dates in the history of the League are:

March 1917
NSW admitted to the League.

March 1918
WA admitted to the League.

The ideals and objectives which had characterised the initiation of the first state associations in 1916 were correlated and finally adopted, in the following form, as the aims and objectives of the League:

The Camden RSL was established on the 1st July 1920 it was known as the Camden Branch of Returned Soldier's Sailor's and Airmen's Imperial League of Australia.

Meetings were held in the School of Arts building. (Now part of Camden Museum). The Branch continued to meet into the 1930's when it closed.

The formation of the formerly Camden Returned Soldiers Fraternity was established in April of 1934 and continued to operate until 11 July 1940 when the Camden RSSAILA was reformed.
Mr. Edger Henry Kirk Downes was elected President with Mr L F de Saxe, Jack Stibbard and George Eldrid as Vice Presidents.
The Secretary was Mr Francis Ernest Coates and Treasurer Frank E Donnelly.
It was reported in the Camden News of the 11th July 1940 that the branch had 24 Members.

During the Second World War the Branch organised the establishment of an Observation post manned by the Voluntary Air Observation Corps in Macarthur Park. The post was manned 24hours a day seven days a week. Their purpose was to record and notify details of all passing Aircraft.

They held fundraising dances for the Women's Voluntary Services for The Soldier comfort Funds to Camden troops on active service.

Volunteering for duty at the ACF-YMCA Hospitality Centre (Service Canteen)

RSSAILA authorised formation of Volunteer Defence Corps. Edger Henry Kirk Downes commanded the local S4 division of the Corps, they covered Camden, Campbelltown and Picton areas.
Their purpose was to protect Cataract and Cordeaux Dams and the section of the water supply canal that ran through the local area.

Undertaking fundraising for Anzac House Appeal the branch held a concert in September 1944 and raised £336/13/3 on Button day July 1944.
The Branch organised the screening of the Film Sons of Anzacs at Paramount Theatre on Tuesday 19th September 1944.

The Branch Meetings in 1945 and 1946 were held at the ACF-YMCA Hospitality Centre. At the end of the War the Camden Returned Soldier's Sailor's Airmen's Imperial League Australia acquired the hall from the Narellan Military camp and moved it to the corner of Oxley and Mitchell Streets. 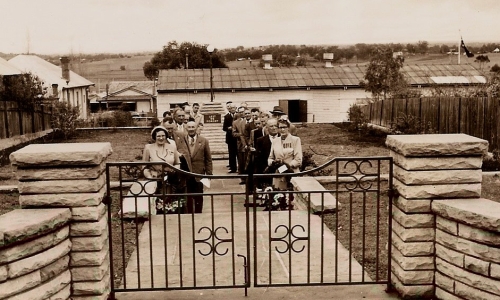 (Above) RSL Hall behind the RSL Memorial Garden c1954 seen from John St.

The Camden branch was formed on the 3rd May 1945.
The purpose of the auxiliary was to assist ex-servicemen.

The mayor was appointed Chief Warden for the Camden Municipality under the National Emergency Service Regulations. Deputy chief wardens and warden were appointed and their duties were to enforce Black Out in the Camden and Narellan Areas.